On the day Amazon founder Jeff Bezos revealed he plans to give away his vast wealth away to charity, it also emerged the company is planning to lay-off 10,000 employees.

In an interview with CNN, the erstwhile world’s richest man, said the bulk of his estimated $124 billion wealth will go to causes like climate change and uniting humanity. 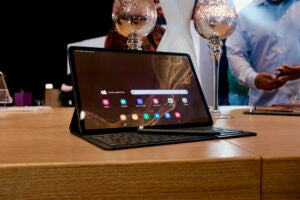 Can you resist a £170 saving on the Samsung Galaxy Tab S8 Plus?

The Samsung Galaxy S8 Plus is a highly capable tablet that has a large 12.4-inch screen and has S-Pen support for extra creativity. This incredible deal sees the price fall from £899 all the way down to £729, giving you a saving of £170.

However, before we pin the medal on messers Bezos and Sánchez, the reports that many Amazon employees – on the back of whom Bezos built such astonishing wealth was built – face the chop provides a little perspective.

The report from the New York Times on Monday says the largest batch of layoffs in the Amazon’s long history will begin soon. It would represent around 1 per cent of the company’s overall workforce.

According to the people familiar with the matter, Amazon is chopping employees from its loss-leading devices division, as well as some employees who work on the Alexa voice assistant.

The report, from Karen Weise says:

“The cuts will focus on Amazon’s devices organisation, including the voice-assistant Alexa, as well as at its retail division and in human resources, said the people, who spoke on condition of anonymity because they were not authorised to speak publicly.”

It comes amid rumours Amazon is reevaluating its work in those sectors under the new CEO Andy Jassey – who took over from Bezos last year. The unit has endured losses of around $5 billion a year, at times.

However, the deficit would have been palatable to the company because the devices have given Amazon a vital foothold in the homes of hundreds of millions of people worldwide. What the company learns about its e-commerce customers from Alexa data has probably been priced into the losses.

Jeff Bezos: Exploiter or philanthropist? Or both? You decide.