The NVIDIA RTX 4080 is here to take on every other GPU on the market besides its bigger brother, the RTX 4090. In many ways, the 4080 is almost identical to the 4090. It is the same size, boasts some insane performance boosts above the 3080, uses a similar crazy power adapter and even wants to take over the gaming world with the help of DLSS 3.

These cards don’t come cheap at all. The RTX 4080, in particular, will cost you R34,999. The model I reviewed in this content is the Gigabyte NVIDIA RTX 4080. The 16GB model. Gigabyte has a few RTX 4080 models available including this one, its AERO OC model and the Master range. They all pack different designs but mainly the same tech. This includes a core clock of 2535MHz, 16GB GDDR6X 256-bit Memory, 3rd Generation RT Cores and 4th Generation Tensor Cores.

For those unfamiliar with the tech jargon, this RTX 4080 is a beast and sets its own benchmarks in the world of the “not-so-top-of-the-range-but-almost-there” category. NVIDIA’s showcase feature for these new 40-Series cards is definitely its DLSS 3 tech and oh boy does it perform like a dream. I was honestly impressed by how incredible DLSS 3 is. But more on that later. I also tested out the same Gigabyte GPU in its RTX 4090 variation for reference in this review so you can understand just how close the 4080 is in comparison. 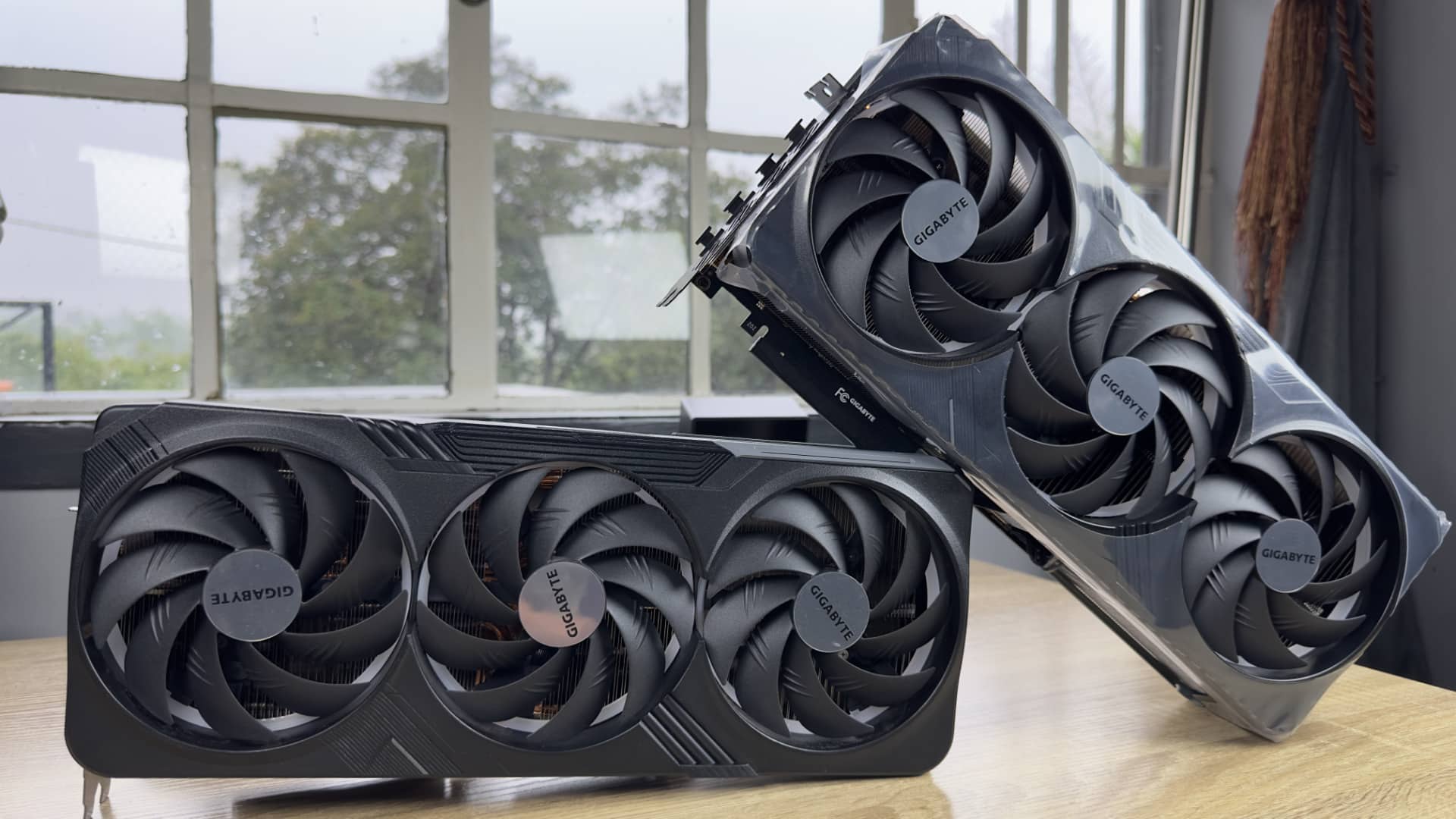 This particular card follows Gigabyte’s overused GPU design. It comes in the same box and features the same gunmetal colour and wind force technology.  If you compare this to say, its AMD GPUs, it is hard to tell the difference apart from the massive size and chunky heatsinks. The card includes three DisplayPort 1.4a ports and one HDMI 2.1 port.

Both the 4080 and 4090 are identical in size and in fact, hard to tell apart. I actually had to take down the model number just so I don’t mix the two cards up when I was swapping them around to do tests. There are three giant 110mm blade fans slapped on the top and heatsinks all over the show. The fans spin in different directions in order to move heat away from the vapour chamber and they don’t even turn on unless they need to. Gigabyte says they have double the life span compared to previous models too. I doubt you’ll ever wear them out anyway.

The fans also include RGB that syncs to all your other stuff using RGB Fusion. However, at the time of reviewing the Gigabyte software wasn’t updated to change the lighting so it used the default style. This saw the fans light up and flicker depending on the RPM.

In the box, you’ll get the GPU, some booklets and the infamous three 8-pin to 12VHPWR adapter. Keep in mind that the RTX 4080 uses three 8-pin power cables whereas the RTX 4090 uses four 8-pin connectors. The GPU uses a bit less power so it makes sense. However, the recommended PSU is still 850W for this Gigabyte card. The GPU also comes with an anti-sag bracket which I will get into in a bit.

So I initially thought that installing this RTX 4080 would not be a problem because I have one of the biggest gaming cases you can find, the Cooler Master Cosmos 700M. However, I opened up my PC ready to slot this bad boy into the case and lo and behold, it didn’t fit. I spent five hours rearranging the entire PC again to make this GPU fit into the case. However, if your case isn’t highly modified then you won’t have such a problem.

Installing the card is easy enough but you’ll likely need to make use of the anti-sag bracket. Actually, I recommend you do. This is installed by removing two screws from your motherboard and replacing these holes with the provided level mounts. I then screwed in the bracket to the board and attached the other to the GPU. Once done, you just need to clip in the GPU and tighten the screw onto the mount. I also added a GPU arm under the card for safety due to how my motherboard is arranged in the centre of the case.

The cabling of course requires the adapter if you don’t have one of the very new power supplies on the market. However, even after rearranging the case and using the cable, it still bent when I closed the door of my PC. I didn’t want any fires so I left the case open at all times. I highly recommend you do your research before investing in these 40-series cards. They are much bigger than you think and chances are, the PC case door will be a problem. Just don’t bend this cable at any cost.

I ran a number of tests using the GPU. NVIDIA also sent through some details on how to enable DLSS 3 on supported games. This Gigabyte RTX 4080 already comes overclocked out of the box which is great for people who just want to plug it in and play.

I do need to stress that DLSS 3 is great but sadly, only available on certain titles. The rollout is also going to take much longer than DLSS 2 but from my early results, it will be worth the wait.

In some cases, I saw games perform up to 60% better with DLSS 3 enabled. Cyberpunk 2077, for example. hit well over 110FPS compared to 60FPS with DLSS disabled. We are no longer talking about five or six-frame differences here. The gains are out of this world good.

DLSS 3 is also backwards compatible but games that are designed specifically for DLSS 3 will come with the Frame Generation option which works by taking the previous frame and the current frame and generating an interstitial frame. This does come at the cost of latency though as these additional frames create additional latency but NVIDIA Reflex tries to even that all out.

The Frame Generation can basically double the framerate of a game making things look so much smoother and feel better to play too with it turned on. However, it does increase latency slightly. So competitive gamers will likely turn it off and leave Reflex on instead. Frame Generation also enables Reflex by default because of the extra latency it causes.

A Plague Tale (RTX 4080, 4K, Super Resolution off, Frame Generation off, Reflex off)

A Plague Tale (RTX 4090, 4K, Super Resolution off, Frame Generation off, Reflex off)

I also tested a few games that don’t use DLSS 3 so you can see the difference between the 4080 and 4090 cards. The tests showed the following scores.

You can see from the results that NVIDIA isn’t playing around with its DLSS 3 tech. These games are in fact doubled in performance. The latency is also a lot better. However, it is all dependent on your preference and I think NVIDIA offering these options to gamers is a great opportunity for gamers to fiddle around with how they prefer to play.

The RTX 4080 is definitely powerful and DLSS 3 will likely revolutionize PC gaming. The performance gains are exceptional. In fact, the improvements across the board are truly revolutionary and NVIDIA has done more here than just pump more cores into a GPU. They have worked on fixing CPU bottlenecking, lowering latency and so much more. The downside is that all of this is going to take a long time before it makes a difference to the games you might actually play and also cost you a lot of money.

I also can’t leave this review without mentioning the card’s size and what a huge inconvenience it was. This tech isn’t approachable for the majority of gamers out there so keep that in mind. There’s also the price tag which is just…. well….. insane. It is also quite a lot cheaper than the RTX 4090 so this 4080 is definitely the better buy if you are spending a ridiculous amount of money on GPUs. But cheaper doesn’t really mean “affordable here”.

This review is based on the Gigabyte NVIDIA RTX 4080 OC sent to us by Gigabyte. Find out more about the GPU here.

The Gigabyte NVIDIA RTX 4080 is extremely powerful and has some incredible performance gains over the 3080. Not to mention DLSS 3 is exceptional technology that truly delivers 60% performance gains in certain titles.