NVIDIA today announced that it’s brining Goat Simulator 3 to GeForce NOW for the month of November. This is alongside 25 other games that will be made available to stream through the service, with a handful of titles dropping each week. For this week, NVIDIA is looking at adding a total of 11 games to the service. As always, you’ll still need to own these games on their respective client. Such as Steam or the Epic Games Store.

Also worth noting is that 15 of the games being added this month will be day and date releases. Meaning you can play them via the cloud on the day they release for PC. It’s a perfect time to check out GeForce NOW if you haven’t already done so. Especially with the current deal going on where you can pick up a 6-month Priority membership for 40% off. Normally it costs $50, but NVIDIA is offering it for $30 for a limited time. The sale will continue through November 20. So there’s still a couple weeks left.

Goat Simulator 3 isn’t available this week but it is coming in November. It’ll be dropping into the Epic Games Store as an exclusive title on November 17. For this week’s titles, subscribers get access to six new releases. This includes Against The Storm, Horse Tales: Emerald Valley Ranch, Space Tail: Every Journey Leads Home, The Chant, The Entropy Centre, and WRC Generations – The FIA WRC Official Game.

Genshin Impact’s new 3.2 update is also available. So if you’ve been streaming Genshin Impact through the service, rest assured you can play the most recent content.

You can check out the full list of games coming in November at NVIDIA’s official blog post, and you can also find the remaining ones not listed here in the image below. 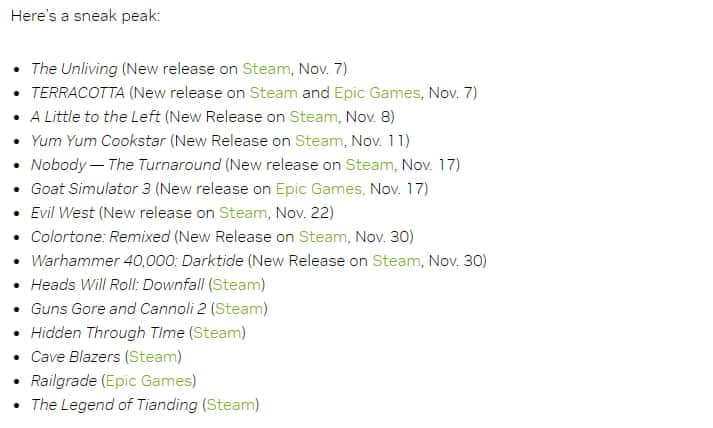