A bunch of new features are rolling out for the Google Meet app on Android. Google Meet already offers a plethora of features, and now it is getting 360-degree backgrounds and in-call emoji reactions.

Speaking of 360-degree backgrounds, Google Meet will make use of the device’s gyroscope data and move the background as you move your phone. Google revealed (via iandroid.eu) that these backgrounds are videos, and for now users can select between an oasis, sky city, or mountain temple.

These 360-degree videos will join the already existing set of wallpapers, blur effects, video/moving backgrounds, styles (B&W, sepia, etc.), and face filters, in addition to the ability to uplod your own wallpapers.

Apart from 360-degree backgrounds, Google Meet is also getting in-call emoji reactions, a feature that Google has been planning since 2022. Emoji reactions will appear on the left side of your screen as they are sent, and you will see a burst of emojis appear when multiple users send them at once.

In order to send a reaction, you will have to tap the new smiling face button in the bottom row. Initially there will be nine emojis to choose from: Sparkling Heart, Thumbs Up, Party Popper, Clapping Hands, Face with Tears of Joy, Astonished Face, Thinking Face, Crying Face, and Thumbs Down. You can also select the skin tone of the emoji, which will then be applied to all emojis sent from that point onwards.

The Google Meet in-call emoji reactions feature is rolling out to the web app and iOS for now, and it will be coming to Samsung Galaxy and other Android devices “soon”. 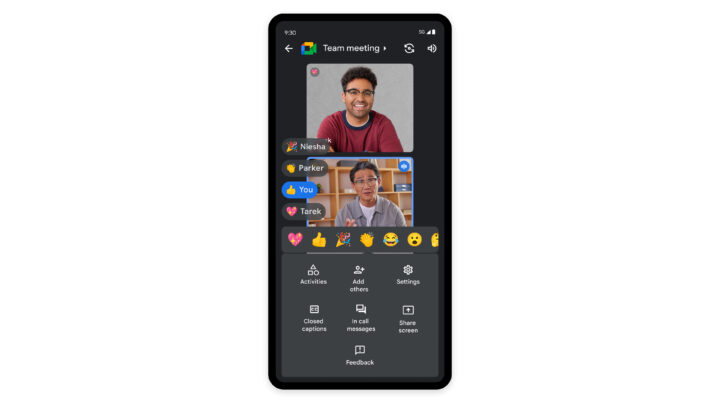