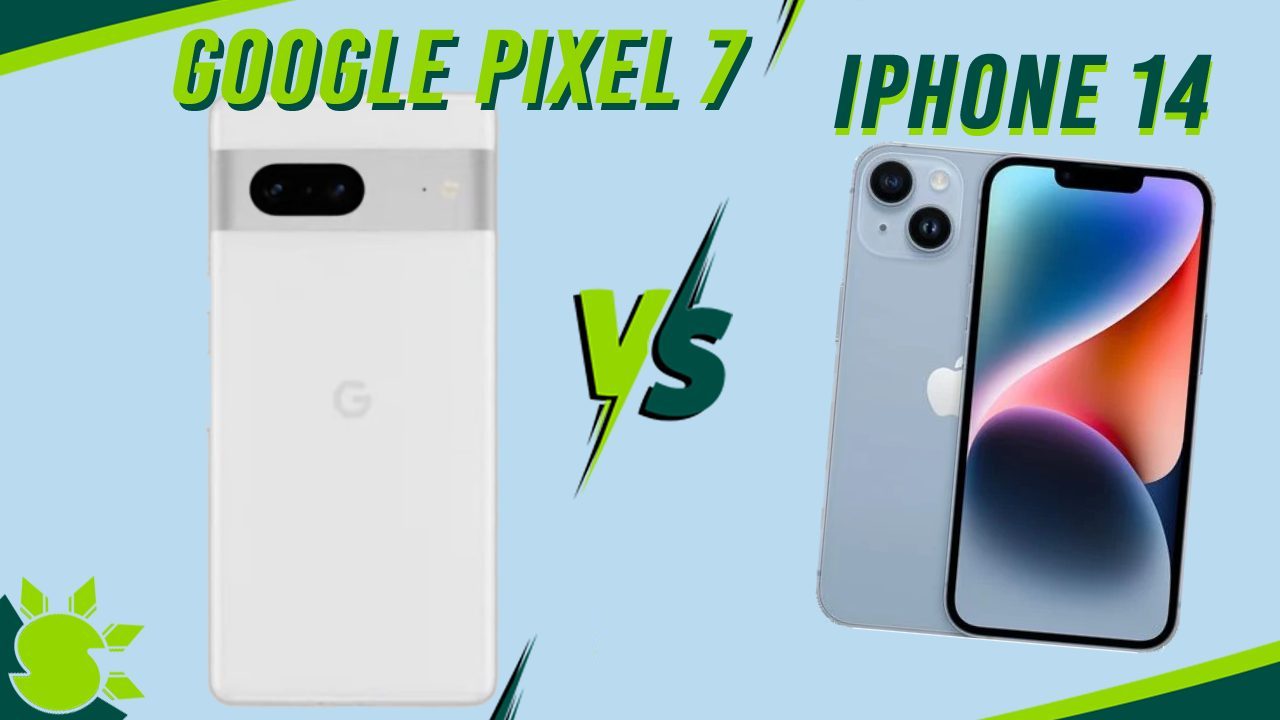 People who sought a tiny iPhone this year were disappointed because Apple dropped the Mini variety with the new series. Instead, Apple introduced the Plus model, which is effectively the inverse: an extra-large non-Pro iPhone. As a result, anyone looking for a last-generation small phone from Apple must now settle for the vanilla iPhone 14. Instead, even if practically every handset has comparable proportions to the vanilla iPhone 14 series, there are still numerous small phones available in the Android sector. The Google Pixel 7, one of the most recent tiny phones in the Android industry, comes with a stock Android version. Given the comparable proportions, many individuals are unsure which one to choose. This table compares the key specs of the Google Pixel 7 with the Apple iPhone 14.

If you want a phone with a nice design, these are unquestionably fantastic possibilities. The Google Pixel 7 boasts a unique design that includes a horizontal camera module, a glass back protected by Gorilla Glass Victus, an aluminum frame, and a variety of color choices. It is also waterproof, with an IP68 rating. The Apple iPhone 14 features an iconic design with flat borders and a smaller size. It also has a higher build quality, with a glass back covered by Ceramic Shield, an aluminum frame, and superior water resistance thanks to the IP68 certification, which allows it to travel underwater for up to 30 minutes at a depth of 6 meters. However, the iPhone has that unsightly notch that hardly everyone loves. Do you like Pixel’s original design or Apple’s famed notched design?

These two phones’ screens have comparable specs. The Google Pixel 7 has a 6.3-inch panel (wider than its competitor) that displays pictures with a Full HD+ resolution of 1080 x 2400 pixels, a refresh rate of 90 Hz, HDR10+ certification, and a peak brightness of 1,400 nits. It has an in-display fingerprint scanner and dual speakers for a better listening experience. The iPhone 14 boasts a smaller 6.1-inch diagonal Super Retina XDR OLED display, a Full HD+ resolution of 1170 x 2532 pixels, HDR10 certification, Dolby Vision compatibility, and 3D facial recognition for verification through Face ID, as well as stereo speakers. The iPhone appears to have stronger image quality, but the Pixel has a faster refresh rate and a larger display, which are excellent qualities for gaming.

The Google Pixel 7’s camera hardware is really superior to that of the iPhone 14, and it should be capable of taking better images. It has two cameras: a 50 MP primary sensor with laser autofocus and OIS, and a 12 MP ultrawide camera. The iPhone contains two 12 MP sensors: the primary camera and the ultrawide camera.

The Google Pixel 7 and Apple iPhone 14 are both packed with flagship-class hardware, so you can expect excellent performance from these handsets. The Google Pixel 7 is powered by a Google Tensor G2 mobile platform with a 5 nm manufacturing process and an octa-core architecture that includes two Cortex X1 CPUs running at a maximum frequency of 2.85 GHz, six Cortex A78 CPUs running at 1.8 GHz, and a Mali G710 MC10 GPU, as well as 8 GB of RAM and either 128 GB or 256 GB of UFS 3.1 internal storage. The iPhone 14 has an Apple A15 Bionic processor with an octa-core architecture that includes two Avalanche performance cores operating at 3.23 GHz, four Blizzard energy cores running at 1.82 GHz, and an Apple proprietary GPU with 5-cores. In addition to the SoC, there is 6 GB of RAM and 128 GB, 256 GB, or 512 GB of native storage. The installed operating systems are the most recent versions of Android and iOS: Android 13 and iOS 16, respectively. These phones will have very extensive software support, making them the perfect choice if you want a long-lasting handset.

Let’s move on to the battery. The battery on the Google Pixel 7 is significantly larger than that of the iPhone 14, with a capacity of 4355 mAh vs 3279 mAh on the Pixel. The iPhone, on the other hand, has a comparable battery life due to the better optimization level given by the iOS operating system. Both phones support rapid charging and wireless charging, but only the Apple model has MagSafe technology (it allows connecting external accessories such as battery packs to the rear cover).