Oppo is expected to launch a new A-series smartphone – the Oppo A98. The Oppo A98 is expected to be the company’s first A-series handset with a 108MP camera setup. The smartphone was earlier spotted on the TENAA certification website which revealed the presence of a curved display panel. Ahead of the launch, we have now spotted the upcoming Oppo A98 with the model number PGW110 on the Geekbench benchmark database.

The benchmark listing for the upcoming A-series smartphone reveals some of the key specifications such as processor, memory, and Android version. Let us take a closer look at the Oppo A98 Geekbench 5 benchmark scores and what we know about the device. 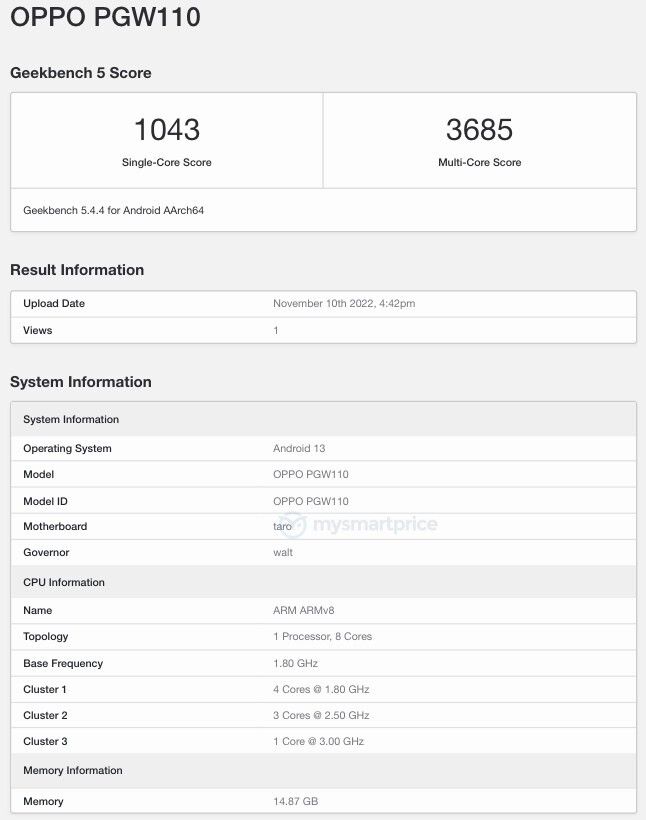 The Oppo A98 made an appearance on the Geekbench benchmark database with the model number PGW110. The smartphone managed to score 1043 points in the single-core round of the benchmark test. Whereas, in the multi-core round, the score was recorded as 3685 points. The Geekbench 5 listing for the upcoming Oppo A98 reveals the presence of an octa-core processor with codename taro and 1 + 3 + 4 core configuration.

Based on the core configuration and codename, it seems like the Oppo A98 will be powered by Qualcomm Snapdragon 8 Gen 1 processor. To those unaware, the Snapdragon 8 Gen 1 is fabbed on a 4nm process and brings with it an integrated Adreno 730 GPU. The listing further reveals that the smartphone will be offered in a 16GB RAM variant. This means that the Oppo A98 will be the first A-series smartphone to offer massive memory.

As per the Geekbench listing, the Oppo A98 will boot Android 13 out of the box. Apart from this, the listing doesn’t reveal anything about the upcoming Oppo A-series device. However, based on past leaks, the Oppo A98 will come equipped with a 108MP camera setup. Based on these, it appears that Oppo A98 might be a flagship killer segment smartphone and might take on the likes of the Redmi K series in China.

What do you think of the Oppo A98? Do let us know in the comments section below.