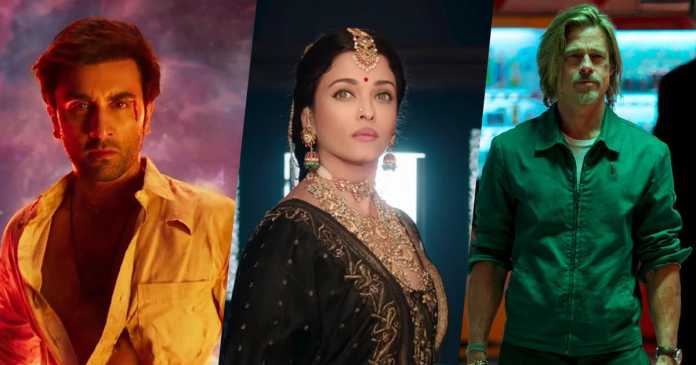 October is fading into November, and we all know what that means. OTT platforms this week will see new releases like Brahmastra, PS-1, Bullet Train and more films. And like every week iandroid.eu brings you all the major OTT releases in one place with as much information as possible so that you need not look anywhere else for your weekend entertainment information.

OTT platforms like Netflix, Amazon Prime, Voot, Disney+ Hotstar, Sony Liv ensure to bring fresh content for its viewers each week in order to keep them engaged. And this week we have multiple new OTT platform releases as well. A new watch list of the hottest things to watch on your favourite OTT platform. From action to romance, mystery, and drama, there are movies and shows of every genre.

This is a Hindi fantasy adventure picture directed and penned by Ayan Mukerji.

The story starts with an introduction to Shiva, an orphan with pyrokinetic powers, who figures out that he is an Astra. He tries to stop the strongest of the Astras, the Brahmastra, from falling into the wrong hands. The story has Amitabh Bachchan, Shah Rukh Khan, Ranbir Kapoor, Alia Bhatt, and more in pivotal roles.

This story is an epic historical drama directed by Mani Ratnam, who, along with Elango Kumaravel and B Jeyamohan, is a writer. The story follows the life of Arulmozhi Varman, a Chola prince who later becomes the renowned emperor Rajaraja. This movie has Trisha Krishnan, Jayam Ravi, Vikram, Aishwarya Rai Bachchan, and more.

The story follows five assassins as they board a swiftly-moving bullet train. Sometimes during the ride, they discover that their missions have something in common. What is it? Watch this epic movie and find out. The director is David Leitch, and the movie’s cast includes Joey King, Brad Pitt, Brian Tyree Henry, Aaron, Taylor Johnson, and more.

The story revolves around 2 youngsters from divergent life paths. A lot of different people play an important role in their lives. What’s mutual between them? How and why are they common? This forms the central tenet of the movie. Raju is the writer and director of the movie. It has Ramya Nambessan, Rohit, Sanchana Natrajan, and others in pivotal roles

The story follows Enola Holmes, a newly-minted detective-for-hire who takes on her first case to locate a missing girl. There’s also a dangerous conspiracy brewing that requires the help of friends, and the famous Sherlock, to unravel. Harry Bradbeer is this caper’s director, including actors like Henry Cavill, Helena Bonham Carter, Millie Bobby Brown, David Thewlis, Hannah Dodd, and more.

Manifest Season 4 Part 1 deals with tackling the kidnapping of Eden and the death of Grace, both of which will dampen the emotional motivation of the characters in the fourth season. Jeff Rake is the creator of this show that stars Josh Dallas, Luna Blaise, Melissa Roxburgh, Parveen Kaur, Daryl Edwards, and more.

Marion and Tom’s home have to deal with the arrival of Patrick, which triggers events that happened 40 years ago. Michael Grandage is this movie’s director, with actors like Harry Styles, Gina McKee, Emma Corrin, Linus Roache, and more.

The story is set in America’s last Blockbuster video, which explores what and who it takes for a small enterprise to succeed. Vanessa Ramos is the director of this show, which stars Melissa Fumero, Randall Park, Madeleine Arthur, and more.

This thriller follows an ex-Interpol officer who ensures there are shock waves and confusion in the global underworld. He then hides, only to emerge for his beloved family’s sake decades later. The movie stars Manish Chaudhari, Nagarjuna Akkineni, Keith Dallison, Sonal Chauhan, and more in pivotal roles.

Season 2 of this show will deal with bigger consequences of the intimate tape leak incident and the effect on the love life of Simon and Wilhelm. The creators of this show are

The story follows the life of a financier called Nandhu, who journeys through the issues of his internal guilt, seeking his mortal rival. We follow him. Will Nandhu succeed in his quest? The director of this movie is Parthiban Radhakrishnan, while the actors are Jai Bala, Chandru, Anandha Krishnan, Rekha Nair, Brigidal Saga, Sai Priyanka Ruth, and more.

The story follows the lives of a US death row prisoner and a lady trapped in a cellar beneath an English vicarage. Their paths cross most strangely. The director of this movie is Paul Guigan, and it stars Dolly Wells, David Tennant, and more.