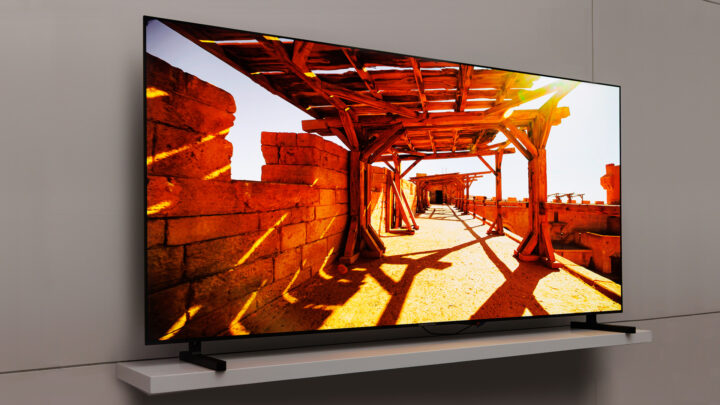 Samsung has long had an aversion to OLED displays for TVs. That’s despite the fact that it’s the largest manufacturer of AMOLED displays for mobile devices. It’s not that the company didn’t have the capacity to make large OLED panels. Samsung maintained that it didn’t view this technology as worthy of being utilized for high-end TVs. LG has remained all-in on OLED TVs for almost a decade now. Samsung’s answer came from its QLED TVs, which were first introduced in 2022.

The initial QLED panels were more similar to conventional LCD panels than OLED. They were transmissive and required an LED backlight since the pixels didn’t emit their own light. OLED panels are emissive, in that they emit their own light. This also meant that QLED didn’t suffer burn-in issues like OLED, which was one of the reasons Samsung gave for shunning OLED. It also maintained that QLED scales more cost-effectively for larger screens.

This strategy worked well for Samsung. It didn’t lose any considerable ground to LG in the global TV market. Samsung remained one of the leaders in the market even as both LG and Sony pushed forward with high-end OLED TVs. Samsung wasn’t betting its future on QLED, though. Its true OLED competitor wouldn’t be revealed until a few years down the line. By 2022, it became evident that Samsung was shifting its focus to QD-OLED, investing over $8 billion into this endeavor.

Samsung introduced its first QD-OLED TV, the S95B, last year. It was made available in 55-inch and 65-inch sizes with prices starting at $2,399. The company is now ready to expand the lineup and lower the barrier of entry so that more customers can opt for its QD-OLED TVs over conventional OLEDs. It has also further improved its panel technology to blow the likes of LG out of the water.

The company is showcasing its 2023 QD-OLED TV lineup at the Consumer Electronics Show 2023 in Las Vegas this week. There’s a smaller 49-inch size, which is obviously going to cost less, while a larger 77-inch size has been added as well. The 55-inch and 65-inch sizes have also been retained. According to Samsung, these TVs offer the best picture quality regardless of the angle of viewing.

The biggest claim is that the 2023 Samsung QD-OLED TVs will reach peak brightness of up to 2,000 nits, that’s approaching Mini-LED territory, the tech that’s used for Samsung’s most expensive TVs. In terms of sheer brightness, the new lineup from Samsung is likely hitting higher numbers compared to LG’s latest 2023 G3 OLED series. Based on the information at this point in time, it’s evident that LG’s latest TVs won’t come close to the peak brightness capability of Samsung’s newest TVs.

LG hasn’t provided figures for the 2023 G3 series. It does say that the new series features a new “light-control architecture and light-boosting algorithms to increase brightness by up to 70 percent.” Last year’s G2 series managed to hit peak brightness of around 1,000 nits in some tests. That’s not to say that this will be a straight 70% increase and that the new TVs are at 1,700, even though they’ll still fall short of the new Samsung TVs at that rate, but that the G3 will only be noticeably brighter than the G2.

Samsung is also relying on advanced technologies like AI and machine learning to improve the overall image quality and color reproduction. While the company hasn’t revealed the full technical specifications at this point in time, it’s evident that the latest QD-OLED TVs may not be a match for the LG G3 series.

Furthermore, the Galaxy ecosystem also works to Samsung’s advantage. Its new TVs run Tizen OS, Samsung’s indigenous smart TV platform that works seamlessly with its mobile devices to offer additional features, such as the ability to play 8K native video recorded on Galaxy phones. People who own Samsung phones, and there are a lot of them, will be able to extract more value out of these TVs. LG doesn’t make phones anymore so it remains lacking in this department.

Ultimately, it’s the customers that stand to benefit the most. Up until last year, if someone wanted an OLED TV, they had to buy from the likes of LG, Sony, and others. Samsung is now on its way to leverage its exceptional brand equity in the global TV market to offer a better iteration of the OLED TV that, so far, appears to be objectively better than LG’s 2023 lineup. What’s not to like about that?