We’ve seen plenty of deals on LG OLEDs for Black Friday and we have another, courtesy of Amazon for the B2 OLED.

In the avalanche of deals we’ve already written about, this one was discounted at Very but Amazon has beaten that price with this very attractive deal for the OLED55B2. With an RRP of £1799, this deal has shaken 48% off the original price to bring the TV down to a sterling £949.

That’s £100 less than what Very is currently offering for the same TV. For more of the best Black Friday deals, check out our page that’s tracking all the latest and best deals. 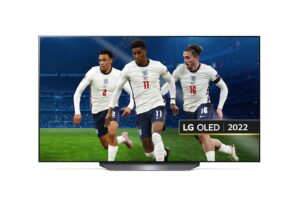 Save a massive 48% on this 55-inch B2 OLED from LG at Amazon, the cheapest we’ve seen this model hit during the course of Black Friday

The LG OLED B2 sits between the entry-level A2 TV and mid-range C2 series as a more accessible option to purchase an OLED TV. It doesn’t have the wide-ranging specification of the C2 for instance it doesn’t come with as many HDMI 2.1 inputs, nor is it as bright or boast as powerful a processor as the C2, but you can expect a very good performance from this TV nonetheless.

As it is an OLED it’s capable of delivering perfect black levels, which is something that LCD TVs often find difficult to achieve. It also has what’s termed as infinite contrast, so it can depict deep blacks all the way to bright whites for a more convincing and realistic portrayal of how images should look.

There’s Dolby Vision IQ that can adjust the brightness of the screen in accordance with the ambient light in a room so you can see all the detail possible whether you’re watching in a bright room or a dimly-lit room. With Dolby Atmos sound, the TV can optimise its audio delivery for a clearer, detailed performance with compatible content.

The webOS interface is home to a wealth of dozens of entertainment apps such as Netflix and Disney+, and with Freeview Play include you get the UK catch-up and on-demand apps as well. For gaming there’s support for Nvidia G-Sync, AMD FreeSync Premium and Dolby Vision Gaming, so you can get the best performance whether you’re a PC and game console user.

While we’ve not reviewed the B2 model, it’s had plenty of good reviews on several online retailers with the right ratings on Amazon averaging 4.5 stars. Given how expensive this TV once was, this is a big saving on an OLED with high quality features.