Samsung’s Galaxy Watch Active 2 may not run Android, but it is the best Android-compatible smartwatch available. 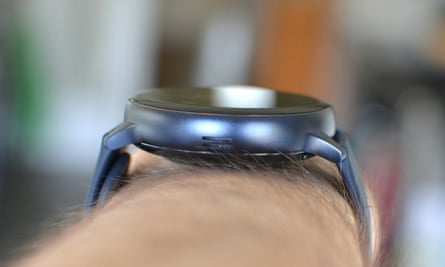 The Active 2 will easily slip under shirt cuffs and is fairly small and discreet for a smartwatch despite the large screen. Photograph: Samuel Gibbs/The Guardian

The Active 2 comes in 40mm and 44mm sizes, both measuring 10.9mm thick. The 44mm version weighs just 30g without the strap, which is 6.5g lighter than the aluminium 44mm Apple Watch Series 5 and just one-third the weight of the Fossil Gen 5.

It has a large, crisp and bright OLED screen that’s easily readable outdoors, plus an excellent selection of digital and analogue watch faces, and a large store of third-party offerings too.

The thin bezel around the edge of the screen has a neat trick: it is touch sensitive and acts like a rotary controller similar to the spinning bezels on previous Samsung smartwatches.

Slide your finger around the edge to scroll through lists, between screens or adjust numbers, with little vibration clicks for each increment. It’s a simple and effective control scheme that is well integrated into the whole of the system unlike digital crowns in Wear OS. Taps, swipes, a physical back button and an apps button take care of the rest.

The Active 2 is water-resistant to a depth of 50 metres, and has a special water mode for preventing accidental activation and clearing the speaker of liquid when you come out. The watch comes with a high quality silicone strap, and takes standard 20mm watch bands. 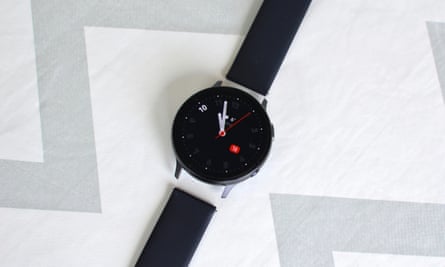 The Active 2 takes regular 20mm straps, which are easy to swap in and out and are available for as little as £5. Photograph: Samuel Gibbs/The Guardian 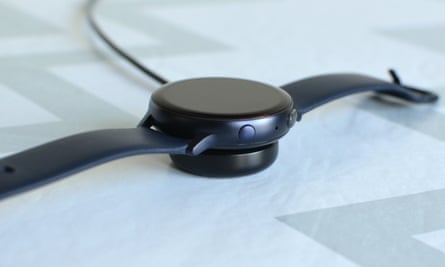 A small wireless puck clips on to the back of the watch via magnets for easy charging. Photograph: Samuel Gibbs/The Guardian

Samsung makes both the hardware and the software for its smartwatches and it really pays off. Performance all round is fast, snappy and lag-free. It’s considerably better than even the best Wear OS watches, and very close to the slick experience Apple offers.

With the screen on all the time, I easily get more than two days battery out of the Active 2, even with a 25-minute run or a two-hour walk tracked in high-accuracy mode.

The Active 2 wirelessly charges in just under two hours using a puck that magnetically attaches to the back of the watch. You can also charge the watch from the back of a Samsung smartphone with Powershare and with compatible wireless chargers. 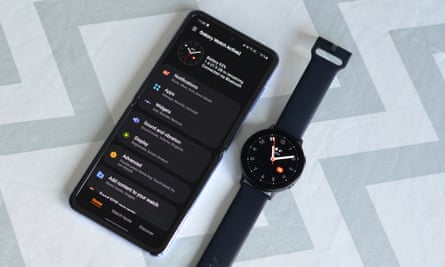 The Galaxy Wearable app on your phone handles the connection to your watch, settings, app installs and updates, watch faces and other bits and pieces. Photograph: Samuel Gibbs/The Guardian

The watch connects to your phone via Bluetooth, but can also remotely connect through wifi when out of range. The connection was strong and reliable, managed by the Samsung Galaxy Wearable app, which handles pairing, settings, apps and other bits.

You can connect Bluetooth headphones directly to the watch to play music and listen to alerts without a phone too. Calls can also be taken directly on the watch, which works surprisingly well.

The Active 2 is generally repairable by authorised service centres, with diagnostics costing £15 outside of the one-year warranty and screen repairs costing in excess of £100. Samsung offers trade-in and recycling schemes for old devices. 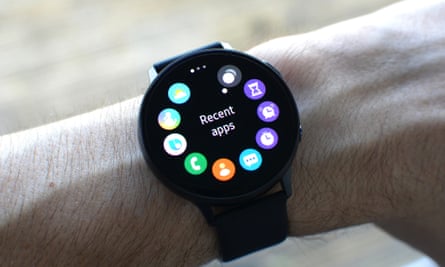 The rotary interface works really well, making the most of the round screen and making app selection and scrolling through lists and text easy. Photograph: Samuel Gibbs/The Guardian

Samsung’s smartwatches run the firm’s own Tizen operating system, rather than Google’s Wear OS or Android. Since release in 2020, the Active 2 has received a series of updates that have improved various aspects of the watch. The firm has also offered long-term software updates to previous watches, which bodes well for new models coming this year.

Tizen is based on a rotary interface, which makes the most of round watch screens, but can also be swiped with your finger.

Notifications appear in tiles to the left of the watch face while widgets including music controls are on the right. Swipe down from the top for quick settings. Press the apps button on the side of the watch to bring up a ring of app icons, which you can tap or scroll around using the bezel.

Tap a notification to expand and scroll through text, or swipe up to dismiss. You can action the notification with the same options you’d have on your phone or quick reply to messages using canned responses, a T9-like keyboard, drawing letters on screen or dictation. It all works really well.

There are only a handful of third-party apps, but that does include Strava and some other fitness tracking apps, plus Spotify which includes offline music downloads and playback. 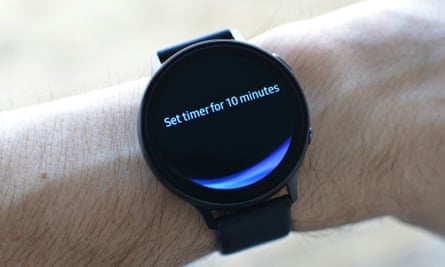 When Bixby works, it’s perfectly capable of doing simple things such as setting timers and alarms, but forget trying to ask things such as the top speed of an African swallow. Photograph: Samuel Gibbs/The Guardian

The Active 2 has contactless payments, but it’s limited to Samsung Pay, which has very little support in the UK compared with Google Pay or Apple Pay. None of my credit or debit cards are supported.

Samsung’s voice assistant, Bixby, is the least polished bit of the Active 2. You can set timers, alarms, turn features on or off, start workouts, ask for the weather and other bits, but you cannot ask general knowledge questions. It also fails to activate sometimes, fails to understand more often than competitors and a recent update to Bixby broke it entirely requiring a full reset of the watch to fix. 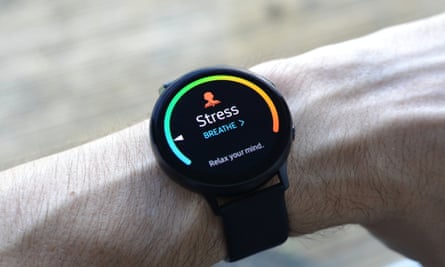 Samsung Health is most comprehensive health-tracking services available and is built into the Active 2.

It has all the usual features: constant heart rate, stress, steps, floors climbed, activity and menstrual cycle. But it also has hydration, caffeine, weight and sleep.

For running, you get many of the same options you get from a lower-end dedicated running watch. You can customise the information on screen, set targets for distance, time, calories, set up guides or laps and have the watch automatically pause when you do. The back button pauses or starts the run, which is better than using a touchscreen.

The GPS-trace, pace and heart rate readings in high-accuracy mode in suburban London were similar to a Garmin Forerunner 245 too.

The watch has the hardware to perform an ECG, but it’s currently disabled pending an update with no timescale. The firm recently won regulatory approval in South Korea for a blood pressure monitoring system, which is expected to roll out there later this year. 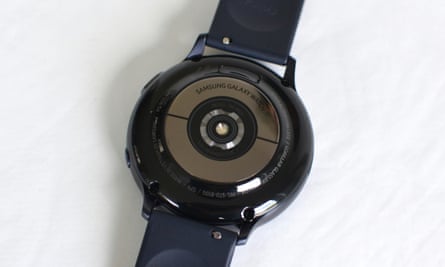 The back of the watch has the various sensors including heart rate scanner in a lump that sits comfortably on your wrist without being sweaty. Photograph: Samuel Gibbs/The Guardian

The Samsung Galaxy Watch Active 2 comes in either 40mm or 44mm sizes and with or without 4G connectivity.

The Galaxy Watch Active 2 might not actually run Android, but that’s to its benefit. As Google’s Wear OS has stagnated, Samsung has steadily improved Tizen and provided updates for its existing watches for years.

The Active 2 is light, well-made, small with a large, bright, always-on screen. There are plenty of watch faces to choose from, the battery lasts two days and apps such as Strava and offline Spotify are actually good.

The Active 2 also excels at tracking health and fitness, beyond simply steps or runs, leaning on the long-standing Samsung Health platform.

But a few niggles such as poor support for Samsung Pay in the UK, Bixby and some notification oddities hold it back from being a five-star product. It can be used with an iPhone, but the Apple Watch is miles better on iOS.

The Samsung Galaxy Watch Active 2 is the best all-round smartwatch you can get for Android.

Cons: poor contactless payment support, Bixby is poor, issues with some smart camera notifications from some manufacturers, limited functionality with an iPhone. 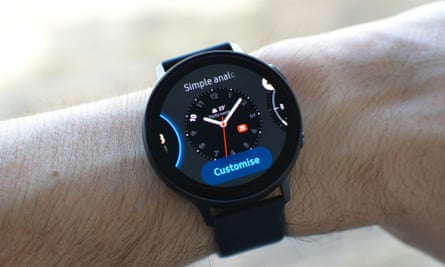 One of the best bits of Samsung’s Tizen watches are the large variety of excellent faces built in, with many thousands more available in the Galaxy Store. Photograph: Samuel Gibbs/The Guardian