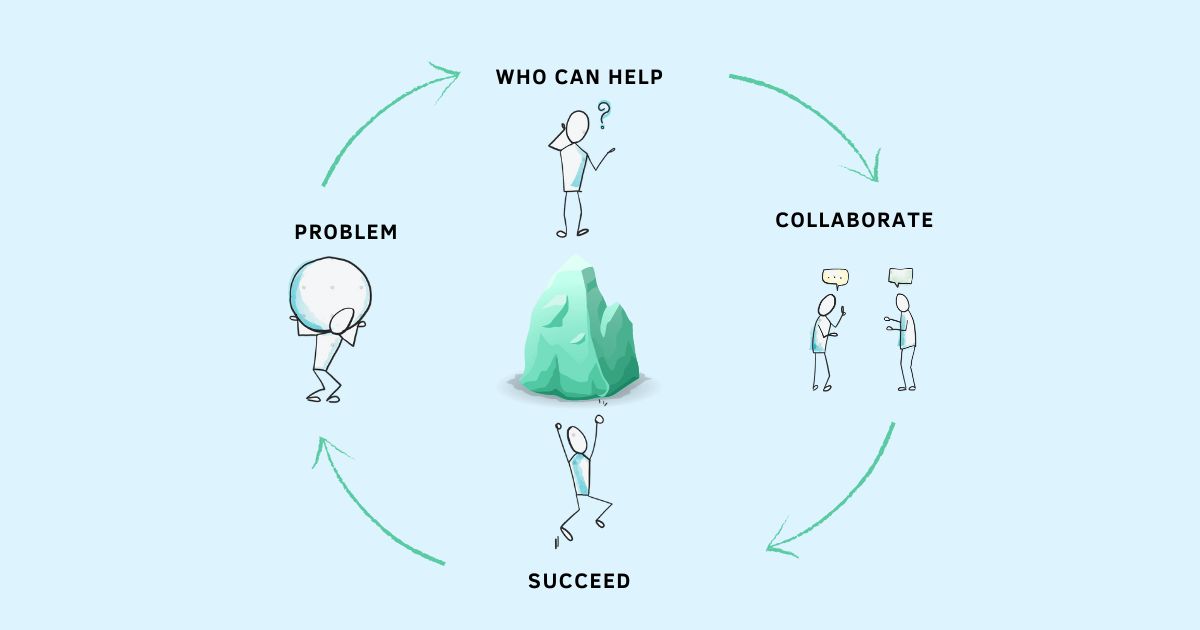 “Don’t bring me problems, bring me solutions” is a phrase used by many managers—even the well-intentioned ones—who believe that it encourages their team members to be creative thinkers, while all it does is promote siloed thinking.

The message you want to pass is one of encouragement and empowerment, but instead, it dissuades your team from bringing up problems—problems they find hard to solve or ones that need your support and guidance.

You want to challenge them, push them harder to find solutions on their own, and show them that you trust them, but that’s not what they hear when you tell them to stop bringing problems. It conveys that you’re only interested in hearing about the problems they can solve. What do you think they will do then when they don’t know how to solve something on their own?

As a manager, it’s important to watch your reaction when your team members bring you problems or try to seek your advice. For example, when they face a challenge or don’t know how to progress in their goals, getting angry or irritated won’t fix the problem. It will only make things worse. Your team will be encouraged to only share the good news while hiding anything that might make you mad.

Telling your team to stop bringing you problems creates an environment in which employees don’t feel safe talking about the real issues.

Stop telling your team “Don’t bring me problems,” instead do this

Instead of “Don’t bring me problems, bring me solutions,” tell your team “Bring me problems, let’s share solutions and collaborate on the next steps.” You aren’t telling your team to come running to you at the first hint of a problem, without applying their due diligence or thinking through solutions. You aren’t telling them that you need to be involved in every decision. Your message is empowering without advocating a solutions-only mindset that shuts down employees.

Many problems at work can’t be solved alone. They often require input from others. Good leaders provide support and collaborate on problem-solving. Instead of “delegate and abandon,” they promote “delegate and empower.”

They’re around to support their teams, coach them and help them get unstuck. In doing so, they aren’t making every decision themselves. Rather, they help their team build the critical thinking skills required to do it themselves.

Telling your team to “bring you problems,” creates a psychologically safe environment in which employees feel encouraged to speak up about their biggest concerns. Instead of trying to be right, it promotes the mindset to find the right solutions. They don’t hesitate to ask for help or advice when they’re blocked from moving forward. They learn to appreciate the value of seeking inputs and collaborating on finding answers together.

The message to do it together and be part of the team promotes a growth mindset in which your team members don’t feel limited by their current skills and abilities. They’re encouraged to invest in learning instead of proving. In trying to be self-compassionate towards themselves than trying to build their self-worth. The benefits of building this mindset in your team go far beyond just problem-solving.

Stanford University psychologist Carol Dweck’s has found that employees in a “growth mindset” company are:

Employees in the fixed-mindset companies not only say that their companies are less likely to support them in risk-taking and innovation, they are also far more likely to agree that their organizations are rife with cutthroat or unethical behavior. When organizations put the premium on natural talent, then everyone wants to be the superstar, everyone wants to shine brighter than the others, and people may be more likely to cheat or cut corners to do so. Teamwork can take a nosedive – Carol Dweck

She suggests “Our best bet is not simply to hire the most talented managers we can find and turn them loose, but to look for managers who also embody a growth mindset: a zest for teaching and learning, an openness to giving and receiving feedback, and an ability to confront and surmount obstacles. It also means we need to train leaders, managers, and employees to believe in growth, in addition to training them in the specifics of effective communication and mentoring.”

When your team operates with a victim mentality, they place the responsibility for problems on things beyond their control—other people, situations, conditions, or the environment. Acting as a victim leads to complaining, blame games, and problem avoidance.

I couldn’t finish the project because the other team was delayed and didn’t deliver their code on time.

It didn’t work because we had fewer resources.

I didn’t get the requirements on time.

Stephen R. Covey calls the victim mindset an “outside-in” state. Blames and complaints come from a sense of lack of control which makes them feel helpless and hopeless about their situation. It prevents them from finding creative ways to move ahead. He suggests shifting from an “outside-in” to an “inside-out” state. An inside-out state comes from a sense of control over their decisions. To do this:

Ask your team to shift their language from a complaint or blame to framing it as a problem. When you set up expectations, ask questions, and collaborate on framing their problems right, it activates the thinking part of their brain. They feel in control of their outcomes. They’re willing to take the initiative to effect positive change.

In most cases, if employees aren’t able to solve problems on their own, they either lack context—don’t have enough background information to decide the next steps, lack clarity—aren’t clear about their goals or they lack competence—the problem is beyond their scope and ability to solve it.

Instead of “don’t bring me problems,” try to Identify which of these—context, clarity, or competence—is causing them to struggle. Knowing the difference will be crucial to building a truly empowered workforce. You can’t throw problems at people and expect them to always solve them on their own. It’s your role as a manager to identify areas where your team needs your support and step in. Give them the right opportunities, challenge them, and expect nothing but excellence. But don’t turn a blind eye when they also need your support.

Ask these questions when they come up with problems:

Employees who are in the early stages of their careers may lack the confidence to make a decision on their own. They probably know the solution and just need your approval to feel comfortable moving forward. Others may need your input when they’re working on complex problems or ones where their decision has a significant impact on the organization. Some employees might also struggle despite having solved similar problems in the past. In such cases, assigning a mentor who can work with them closely may be the right thing to do.

You can’t apply a one-solution-fits-all approach to your entire workforce. You’ve to be willing to do the hard work if you want your team to solve problems on their own. “Don’t bring me problems, bring me solutions” makes you abscond from responsibility, the same responsibility that you expect from your team. Change your messaging, shift your team’s thinking from blame to ownership and give them support when they need it. That’s the only way to build a strong team, a team that doesn’t complain or bother you with petty issues. A team that uses your time wisely by bringing your attention to real issues.