The new Pixel 7 is already available at a knocked-down price thanks to this early Black Friday deal, making it a very tempting prospect.

Google’s most recent smartphone, the Pixel 7, is available for just £30 per month with 100GB of data and no upfront cost at all with this fantastic deal that has arrived even before Black Friday.

To put that into context, the whole deal will cost you £720 over the course of 24 months, while the RRP of the phone is £599; and on top of that, you will get 100GB plus unlimited calls and texts. It’s undoubtedly a deal you shouldn’t miss out on.

If you’d like to compare this deal with some of the other crackers that have been floating around during this sales period, just head over to our Black Friday hub page, which we keep constantly updated with all the best offers we’ve seen.

We were incredibly impressed by the Pixel 7 when we tested it out recently. Not only does the design look classy and premium, even compared to its predecessor, but it offers a very strong showing across several key features, most especially its photography but also its processing power, battery, and its screen. 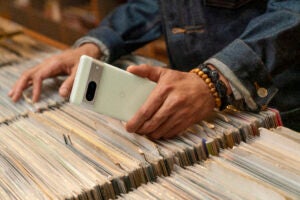 The Pixel 7 is one of the best phones we’ve reviewed this year, especially for the price. Now you can get it for an incredible price that includes 100GB of data on the Three network for just £30 per month, making it even more affordable. If you’re a keen mobile photographer, it’s an ideal handset for you.

Much as with other Pixel phones, the camera is once again the highlight of this device. We found that, under a variety of different lighting conditions, the camera performed excellently, reproducing natural colours and packing images with detail. But the camera is far from the only reason to buy this handset.

The light-touch software is not only pleasingly intuitive but there are also some very handy touches such as Magic Eraser and Live Translate, which leverage the power of the new Tensor G2 chipset to perform highly useful tasks.

The battery easily lasted us through a busy day of use as well, and the screen is solid if a little unspectacular by the standards of some flagship smartphones.

In fact, our only real criticisms of this device is that it doesn’t offer many changes compared to its predecessor, the Pixel 6, that is charges back up relatively slowly, and that it does not have a dedicated telephoto lens for optical photographic zoom. We didn’t consider any of these attributes to be dealbreakers, however, and awarded the handset four and half stars out of five. This deal makes the Pixel 7 yet more irresistible.

Check out these other outstanding deals: