OPINION: Another massive week in tech is in the books. As we take a quick breath ahead of the Black Friday madness, it’s time to name the big winner and the unfortunate loser from the last 7 days.

There have been plenty of winners in tech this week, not least the being the public able to get some early Black Friday deals in the books and avoid some of the chaos. We got news Apple is bringing Emergency SOS to the UK iPhone 14 owners next month, while Samsung 2022 Smart TV owners can now access the Gaming Hub and the Xbox app.

It wasn’t all good news for Microsoft though. We heard it couldn’t make the ‘Keystone’ Xbox streaming device cheap enough to make it worthwhile compared to the Xbox Series S, and the company is desperately trying to make Teams appealing by adding the forced fun of a game of Minesweeper with your colleagues.

However, scroll down to see who we’ve bestowed the winner and loser title on for this week…

When we’re doling out praise to the top Android manufacturers for their sterling flagship phones, it’s easy to forget much of it is possible thanks to the hard work and innovation from the chipmakers at Qualcomm.

Indeed 2023’s Android phones have been set up for greatness after events at the Snapdragon Summit in Hawaii. The American company announced the Snapdragon 8 Gen 2, which will deliver 35% improvement in CPU performance and a 25% uptick in graphics performance, thanks to the Adreno GPU.

We’ll also see hardware-accelerated ray tracing on more Android devices, bringing the en vogue lighting feature to mobile games, should developers take advantage of it. Beyond that, the AI is now smart enough to know if the display should be in portrait or landscape, based on the orientation of your own face. 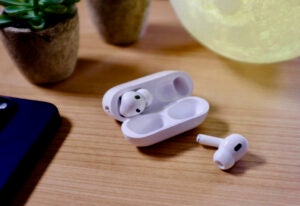 Get the AirPods Pro 2 for less ahead of Black Friday

Amazon has chopped £10 off the excellent ANC-toting earbuds, bringing the price down from the original £249 to £239.

The Gen 2 will also support 200-megapixel cameras with 8K video, while music streamers will be delighted to know the platform now supports spatial audio with head tracking. It’s something Apple Music subscribers have been enjoying via AirPods devices and now we may see it introduced for Android. The chip will also introduce lossless music streaming, a great boost for audiophiles, while Wi-Fi 7 will be on board for the first time.

It all points to some big improvements across the board for the Android big hitters in 2023. Those will include the Samsung Galaxy S23, Oppo Find X, and OnePlus 11. So, when you pick up your next flagship Android phone, remember to raise a glass to Qualcomm too.

It’s a tough time to be a Netflix freeloader. Not only is the company cracking down on password sharing it’s also giving account holders the chance to easily boot them out of the subscription.

The company has announced a new Manage Access and Devices page within the account settings that will allow the bill payer to remotely remove individual devices, like that telly in your ex’s bedroom. That means they won’t have to go through the hassle of changing the password on their account to remove that ex-partner, or roommate they no longer wish to have access to the best shows Netflix has to offer.

The feature is a big win for the Netflix subscribers who actually pay for the service, as they’ll be able to keep an eye on any rogue logins, while removing the account details from hotel and Airbnb TVs.