As Android 13 and One UI 5.0 start to make their way to more Galaxy devices, Samsung is concurrently updating many of its apps, such as Good Lock (which is the inspiration for some One UI 5.0 features), with official Android 13 support.

The Voice Recorder app that comes preloaded on Galaxy smartphones is the latest to get official Android 13 and One UI 5.0 support, thanks to an update that is now available via the Galaxy Store. But that’s not the only thing Samsung has added to the new version of Voice Recorder.

Voice Recorder now supports one of the best features that you get with Android 12 and higher. With the latest version, if you choose a custom color palette for the user interface when applying a wallpaper, the color palette will also be applied to the Voice Recorder app (see the image below; the screenshot on the right is with color palette applied). 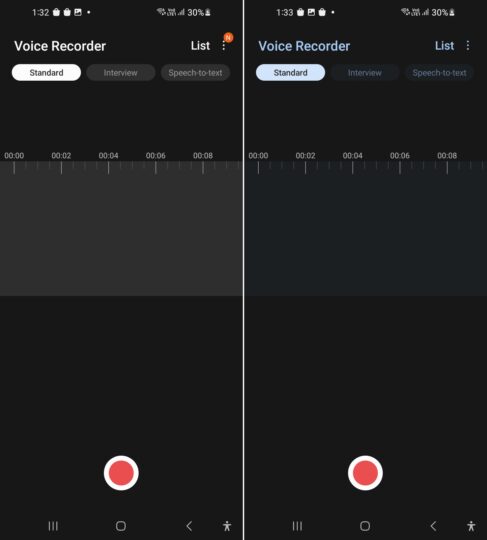 Samsung has also added the option to turn off the Recent searches option. Earlier, if you searched for anything in the Voice Recorder app, those would be saved as suggestions for the next time you hit the search button, but now you can make sure the app doesn’t save any search keywords at all. We’re not sure why a voice recording app would need such a feature, but features that enhance user privacy are always welcome.

Samsung’s Voice Recorder app is the latest to officially support Android 13, but it’s not the last

More first-party Samsung apps are likely to get official Android 13 support in the near future as the company updates more and more devices to Android 13/One UI 5.0 in the coming weeks. Samsung has already released the OS upgrade for all its Galaxy S lineups (excluding the Fan Editions) going back to the Galaxy S20 series and to the Galaxy Note 20 and the Galaxy Note 20 Ultra.

And it is just the beginning, if Samsung’s One 5.0 schedule for various markets is to be believed. Samsung will be updating many flagships and some mid-rangers to Android 13 before the end of this month. That said, we don’t suggest you take Samsung’s schedule too seriously – Samsung has released the Galaxy S20 Android 13 update in Germany in early November, even though the schedule says the update won’t arrive in the country till December.

What we’re trying to point out here is that you might actually get Android 13 and One UI 5.0 earlier than what the schedule for your country says. To check out the schedule for your country, just open the Samsung Members app and go into the Notices section (it’s the bell icon at the top right). If you don’t see anything regarding One UI 5.0 in Samsung Members, try again in a few days.