The MSI GTX 1660 Super GAMING X graphics card has seen a major price cut on Amazon, making it the perfect time to upgrade your gaming PC.

The large online retailer has it available for £259.99, affording you a £55 price cut on its RRP, and offering you one of the better looking GPUs out there for a whole lot less.

If a new graphics card isn’t on the cards for you, then check out our page of the best Black Friday deals where you’ll find some solid discounts on a wide range of different tech.

This GTX 1660 Super is likely to be a great card for those who want to nab a cut-price GPU that’ll perform well in a range of games at both 1080p and 1440p. Performance will be stronger at FHD, but QHD games should be more than playable. 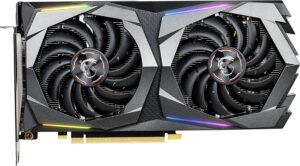 The GTX 1660 Super is a solid GPU for most people who want to game at 1080p and 1440p, and if your PC is due an upgrade, then you might want to take note of this decent deal from Amazon for Black Friday.

In looking at this MSI GAMING X iteration of the 1660 Super itself, it’s definitely a looker, with classy flecks of RGB lighting that isn’t overpowering, as well as a dual-fan shroud which should also aid in cooling the GPU well.

The Keepa graph below details the price cut that this excellent 1660 Super has experienced and how it’s solidly at the cheapest price it’s been for several months. So if you want to grab a GPU for less, now might be the time to do so.