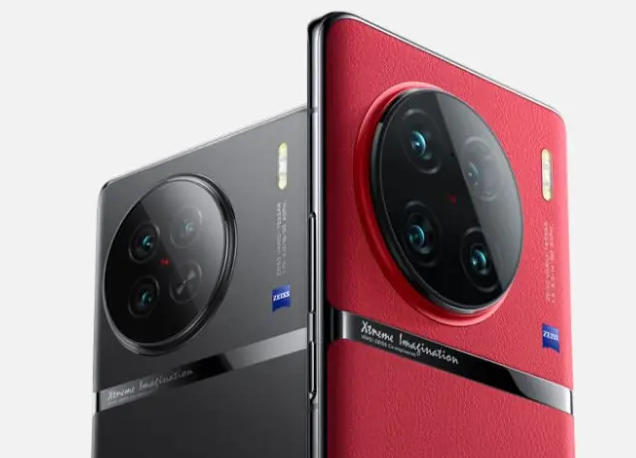 Vivo today launched it’s flagship X90 series that contains three devices – Vivo X90, X90 Pro, and X90 Pro+. The series is the successor of last year’s Vivo X80 series and comes with top-of-the-line flagship specifications. The main focus here is as usual on the photography, improved performance, and better battery life. Check the detailed specifications of these devices below.

The Vivo X90 is the base model and the cheapest one of the three. It is a slightly trimmed-down version of the Pro+ but still has flagship specifications and great cameras. It has a big circular camera module on the rear side that contains a triple rear camera system backed by German camera lens manufacturer Zeiss optics. Just like last year, Vivo has continued it’s partnership with Zeiss optics for camera lenses in these devices as well.

There is a triple rear camera system on the back that contains a 50MP main sensor with f/1.75 aperture, a 12MP portrait lens with f/1.98 aperture, and a 12MP ultra-wide lens with f/2.0 aperture. The front has a 32MP snapper with f/2.45 for selfies and video calls. There is a new in-house V2 chip inside the device for better image processing, improved AI, and better night photography.

It is equipped with a 4810 mAh battery that supports 120W fast wired charging, and the device runs on OriginOS 3 on top of Android 13 out of the box. Other features include USB Type C connectivity, 5G, Bluetooth v5.3, NFC, Wi-Fi 6, ambient light sensor, and accelerometer.

The Pro model is almost identical to it’s vanilla sibling as it has the same design and internals. It has the same 6.78-inch AMOLED display with 120Hz refresh rate, MediaTek Dimensity 9200 SoC based on 4nm fabrication, up to 12GB of LPDDR5 RAM, and up to 512GB of UFS 4.9 internal storage.

There is a difference in the camera setup as Vivo X90 Pro comes with a triple camera setup that contains a 50MP primary sensor with f/1.75 aperture, a 50MP portrait lens with f/1.6 aperture, and a 12MP ultra-wide lens with f/2.0 aperture. There is the same 32MP selfie shooter with an f/2.45 aperture housed in a centered punch-hole cutout on the top of the display.

It is equipped with a slightly bigger 4870 mAh battery that supports 120Hz wired fast charging, and 50W wireless charging. The rest of the specifications is the same as it’s vanilla sibling.

The X90 Pro+ is a top-of-the-line device and is the most expensive among the three. It comes with a quad camera system and all the bells and whistles that justifies it’s price. Design-wise the device looks similar to the other two devices in the series. However, it is different from the other two as it has a quad-camera setup on the rear side while the other two have a triple-camera system.

For optics, there is a quad-camera setup on the rear side housed in a big circular camera module. The camera system consists of a 50MP Sony IMX989 main sensor, a 48MP ultra-wide sensor, a 50MP portrait lens, and a 64MP periscope lens. On the front is the same 32MP selfie shooter for selfies and video calls.

It is equipped with a slightly smaller 4700 mAh battery with 80W wired fast charging and 50W wireless fast charging. It runs on OriginOS 3 on top of Android 13 out of the box. The rest of the specifications are similar to the two devices in the series.